The 16th (Irish) Division was formed, under the second 100,000 man recruitment into Kitchener’s ‘New Army’, in September 1914. It was commanded initially by Lt. Gen Sir Lawrence W Parsons KCB,CB, but
Maj. Gen William B Hickie CB took over in December 1915 as the Division embarked for France. 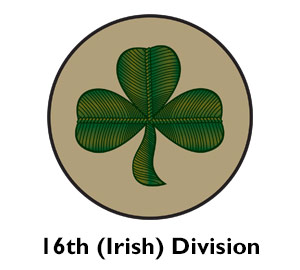 The Division contained many members of the National Volunteers, which had been formed in 1913 to support Home Rule in Ireland. National Party leader, John Redmond MP, had encouraged them to join. The 6th Royal Irish Regiment had some 300 Volunteers from Co. Derry and the Bogside, while the 6th Connaught Rangers had around 500 men from West Belfast. 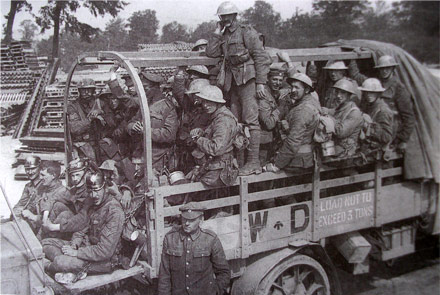 After training in Ireland, the Division moved to Aldershot in September 1915 and deployed to France over New Year and January 1916. By February 1916, the Brigades found themselves attached to Divisions on the Loos Salient for Front Line training. On 1st March, they became operational in Sir Hubert Gough’s I Corps.

Between 27-29 April 1916, the 16th (Irish) Division suffered mass casualties when 48th and 49th Brigades came under gas attach at Hulluch. A total of 570 officers and men were killed, and a further 1410 wounded, by gas and shelling during the battle.

At the end of August 1916, the Division moved from Loos down to the Somme sector. The Brigades were attached to other Divisions. 47th Brigade, attached to 20th Division, took part in the capture of Guillemont on 3rd September. Lt JV Holland, commanding the bombing platoon of 7th Leinsters, won a Victoria Cross.

On 5th September, the 16th (Irish) Division was reconstituted under Gen Hickie and took part in the capture of Ginchy on 9th September. Between 3 – 9 September the Division had 224 officers and 4090 men killed or wounded. After the battles, the Division was moved to Flanders and took position alongside the 36th (Ulster) Division below the Messines Ridge.

On 7th June 1917, the Division went into battle alongside the 36th (Ulster) Division in an attack of Messines Ridge. The Divisions were tasked with taking the village of Wytschaete and succeeded. In July, the Division took part in the 3rd Battle of Ypres, but the battles took their toll and, by August, the 16th (Irish) Division had lost over 4,200 casualties.

In the German Spring Offensive of March 1918, the Division was virtually wiped out. In June, the battalions were dispersed throughout the BEF, and the Division returned to England to be reconstituted. It returned to France in July with only one Irish battalion, 5th Royal Irish Fusiliers.