The 36th (Ulster) Division was formed in September 1914, under the fifth 100,000 man recruitment into Kitchener’s ‘New Army’. The Division was made up from units of the Ulster Volunteer Force, which had been formed in 1913 to fight against Home Rule in Ireland. It was commanded initially by Maj. Gen C H Powell C.B., but Maj. Gen Oliver Nugent C.B. D.S.O. took over in September 1915 as the Division embarked for France. 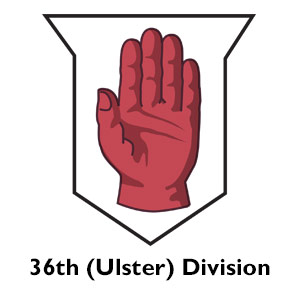 After training at Finner Camp, Co.Donegal, Randalstown, Clandeboye and Ballykinler in Ireland, the Division moved to Seaford and Aldershot, and deployed to France in September 1915. Over the winter of 1915/16, Brigades were attached to line Divisions in the Somme area. By mid-March 1916, the Division was in the Front Line, astride the River Ancre, between Beaumont Hamel and Thiepval.

After a week of artillery bombardment, the Ulster Division took part in the long awaited ‘Big Push‘ – the Battle of the Somme. Leaving their trenches early, and before the bombardment had moved on, the battalions caught the Germans in their bunkers and made progress as far as the German Third Line – the farthest advances on the day. However, the Divisions attacking Thiepval and Beaumont Hamel had been quickly repulsed, and the German machine guns now turned on the Ulster men who were caught in enfilade fire from the side and from behind, causing great slaughter. Over the two days of the battle, the Division lost some 5,500 killed, wounded or missing and, of these, around 2,500 had been killed. With the local village recruitment of the Ulster Volunteers, the losses had a devastating effect back in Ireland.

The Division was withdrawn from the battle on 2nd July and deployed to a quiet sector, opposite Messines Ridge in Flanders. They were joined there in September 1916 by the 16th (Irish) Division after their similar devastating losses at Ginchy and Guillemont. The Divisions spent a year together in the line. Visiting each other’s messes and playing sport against each other, it was said that, had the war ended at that point and the soldiers returned to Ireland, the future history of Ireland would have been very different.

However, on 7th June 1917, the 36th (Ulster) Division and the 16th (Irish) Division went into battle side by side at the Battle of Messines. Each Division was tasked with taking one half of the village of Wytschaete. The battle was a success and the objectives taken. In July, the Division took part in the 3rd Battle of Ypres and, on 20th November, the Battle of Cambrai but the battles took their toll and, by August, the 16th (Irish) Division had lost over 4,200 casualties. 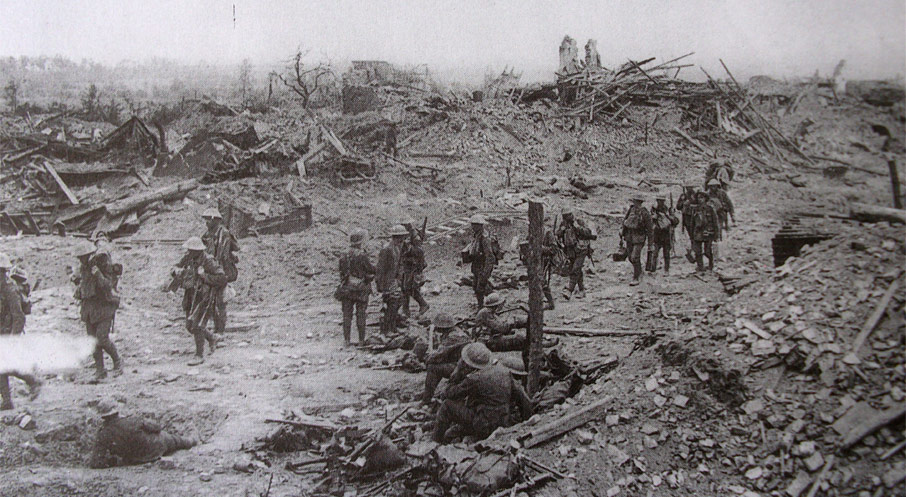 In the German Spring Offensive of March 1918, the Division suffered badly and could barely fill a single battalion, when withdrawn to the coast for reconstitution. With amalgamations and an influx of Irish Regular Army battalions, the Division fought on until the armistice in 1918.